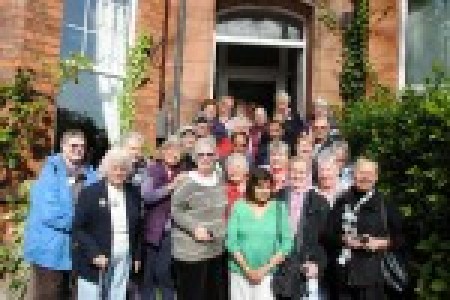 Click here to read all about it SEQld Gathering September 2015

Members from around the world organise Gatherings which may be just one day or may be a few days or even weeks. Events  arranged by groups of members in their home town for other members who may come  from nearby or from anywhere in the world.  Programs  include visits to places of interest, special projects, theatres, museums,  walks – but always time for talking, sharing meals and just being together.

Attending a Gathering is a good  way for new members to learn about the spirit of 5W and for longer-standing  members to meet up again with old friends.

Those attending Gatherings make  their own travel arrangements but accommodation, which may be with local members or in iinexpensive venues, is  arranged by the organisers.

Each Gathering is different,  having its own character and flavour, depending on organisers and location.  Since the first Gathering in Belgium in 1986, these events have taken place  all over the world, including Iceland,  Russia, Ukraine, Germany,  USA, Australia, Romania,  Austria, Switzerland, Japan,  India, Ghana, Hungary,  Sweden, Italy, Czech  Republic, Canada  and the UK.

Recent Gatherings have been in:

* Berlin and around: History, Nature and Modern Times

*Cowboys & Cajuns – in San Antonio with day trips into the Texas Hill country,  the Cajun Mardi Gras through the University of Louisiana at Lafayette and in the French Quarter of New Orleans.

Other Gatherings planned include: